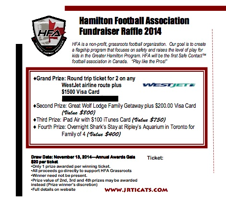 PRIZES.
There will be one (1) Grand Prize Winner in this raffle and three (3) runner up prizes as follows:
HFA USE OF FUNDS RAISED:
We are a non profit organization based on amount of funds raised they will be used to replace our shoulder pad inventory in 2015 and align with our new helmets.
ELIGIBILITY. The 2014 Hamilton Football Association (herein “HFA”) Grand Prize Raffle (the “Raffle”) is open to all persons who are legal residents of Canada and are at least eighteen (18) years of age. Raffle sales begin at 8:00 a.m. on April 30, 2014 , and end at 5:00 p.m. on November 1, 2014. The winner will be drawn on November 25, 2014 at our annual end of season football gala. Proof of eligibility may be required. Winner does not need to be present. Void where prohibited by law.
HOW TO ENTER. Eligible individuals who purchase a twenty dollar ($20.00) raffle ticket from a Hamilton Football Association representative, player or parent or online at jrticats.com are eligible to win.
ODDS/PRIZES. The odds of winning this raffle prize depend on the number of raffle tickets purchased by participants. There will be a maximum of 4000 tickets sold.
HFA is not responsible for any lost, stolen or damaged tickets. Lost, stolen or damaged tickets will not be replaced. It is the responsibility of the parent/player to pay for any lost or stolen tickets and/or money obtained from ticket sales. No reproduction, transfer, assignment, auctioning, bartering or selling of tickets is permitted. Failure to comply with these official rules will result in forfeiture of any tickets and prizes which may otherwise have been awarded as part of this Raffle. Unclaimed tickets will also be forfeited.
The Grand Prize Winner is solely responsible for all federal, provincial and/or local taxes and for any other fees or costs associated with the prize(s)) they receive. The stated value of the prize is based on available information provided to HFA and the value of any prize awarded to a winner may be reported for tax purposes as required by law.
RELEASE AND WAIVER OF LIABILITY. By entering or attempting to enter this Raffle, potential entrants, entrants and the Grand Prize Winner agree at all times to defend, indemnify, release and hold harmless the HFA, HFA Board of Directors, HFA Executive Committee and each of their respective parents, subsidiaries, affiliates, officers, directors, agents, employees, prize suppliers and advertising/promotion agencies (collectively “the Released Parties”) from and against any and all liability, claims or actions of any kind whatsoever for injuries, expenses, damages or losses to persons arising out of participating in the Raffle, or which may be sustained in connection with receipt, possession, ownership use or misuse of the prizes, or while preparing for, participating in, and/or traveling to any prize-related activity. The Released Parties expressly disclaim any responsibility or liability for injury or loss to any person or property relating to the delivery bound by all the Official Rules of this Raffle. If, in the HFA’s opinion, there is any suspected or actual evidence of electronic or non-electronic tampering with any portion of the Raffle, or corruption that would affectthe administration, integrity, security, fairness or proper conduct of the Raffle, the Released Parties reserve the right, in its sole discretion,to disqualify any individual who tampers with the entry process; to modify or suspend the Raffle or to terminate the Raffle. Any person attempting to defraud the HFA or in any way tamper with, damage or undermine the legitimate operation of the Raffle will be
disqualified and may be subject to civil and/or criminal prosecution. Further, the Released Parties are not responsible for any additional expenses, omissions, delays or re-routing resulting from any acts of any government or authority. Also, the Released Parties are
not responsible, and may disqualify an entrant, if his or her contact information does not work or if it is changed without entrant giving prior written notice to the HFA. Released Parties are not responsible or liable to any entrant or to the winner or any person
claiming through such winner for failure to supply the prize or any part thereof, by reason of any acts of God, any action, regulation, order or request by any governmental or quasi-governmental entity (whether or not the action, regulations, order or request proves to
be invalid), equipment failure, threatened terrorist acts, terrorist acts, kidnapping, air raid, blackout, act of public enemy, earthquake, war (declared or undeclared), fire, flood, epidemic, explosion, unusually severe weather, hurricane, embargo, labor dispute or strike
(whether legal or illegal) labor or material shortage, transportation interruption of any kind, work slow down, civil disturbance, insurrection, riot vandalism, or any other cause beyond the Released parties sole control.
CONSTRUCTION/GOVERNING LAW/DISPUTES. All issues and questions concerning the construction, validity, interpretation and enforceability of these Official Rules, or the rights and obligations of any entrant and the HFA, shall be governed by, and
construed in accordance with the laws of the province of Ontario, without giving effect to any choice of law or conflict of law rules or provisions that would cause the application of the laws of any jurisdiction other than Ontario. The parties to any such dispute
hereby consent to exclusive jurisdiction and venue of the courts located in the city of Hamilton, Ontario in any action to enforce these Official Rules or relating to this Raffle. In the event that any provision of the Official Rules is determined to be invalid or otherwise unenforceable or illegal, the other provisions will remain in effect and will be construed in accordance with their teams as if the invalid or illegal provision were not contained herein. The HFA’s failure to enforce any term of these Official Rules will not constitute
a waiver of that provision. Entrants agree to waive any rights to claim ambiguity of these Official Rules.


COMMENTS
This article has No Comments.
Be the first to add your comments!
Click the "Post a New Comment" button below.
firstname lastname commented Just Now
×
"body"