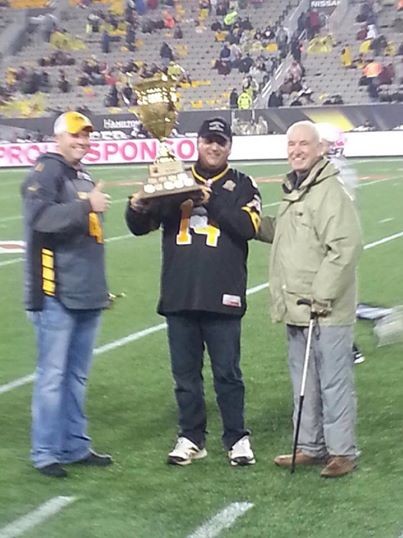 Congratulations to HFA's Brent Howlett, President of HFA and Varsity Commissioner, who was presented with the Rocky DiPetro Builder Award. Brent has put in over 15 plus years building minor football. He currently still remains on the coaching staff at the Hamilton Hurricanes Football Club Spring Bantam, in the youth division on the PeeWee AAA team and on the St Mary's High School Football Coaching Staff. Congratulations Coach Brent!!!

THE ROCKY DiPETRO BUILDER AWARD presented by Nissan
Awarded to a coach, executive or board member with Play Action member association for a lengthy and distinguished career in support of the game of football.

The Less Browne Award presented by Pioneer is presented to a player who consistently displays effectiveness, intensity and passion on the playing field. Play Action centres were asked to provide their nominations. Last night at the #Hamilton Tiger-Cats game, HFA's Jeremy Petrosky from the PeeWee AA was announced as the winner 2014 Less Browne Award!! Congratulations Jeremy, your entire Jr. Ticat Family is proud of your accomplishment!