HFA going to the championship 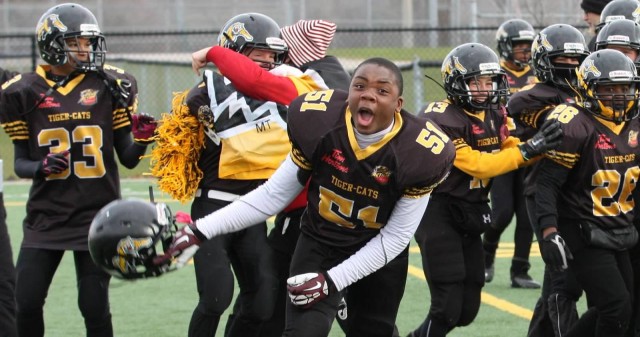 HFA teams at the AA and A levels compete in the OFL in fall play while its AAA teams play in the Ontario Varsity Football League in the fall.

Here are the HFA's championship contenders:

• The Hamilton Jr. Ticat Peewee AAA team (ages 11 and 12) will face off against the Burlington Stampeders in the OVFL finals at St. Mike’s in Toronto at 3 p.m. on Sunday. The Jr. Ticats knocked off London Jr. Mustangs in the Western Division finals 19-17 to earn the spot in the championship game.

• In the OFL Bantam A division (players aged 13 and 14), the Hamilton Jr. Ticats will play Burlington Red at 5 p.m. Saturday. All OFL championship games will be played at the St. Catharines Kiwanis Field.

• At the OFL Peewee AA level, the Jr. Ticats will be facing the Bears in a game set for 2 p.m. Sunday, after knocking off the Bisons 19-6 last Saturday.

• In the OFL Peewee A division, the Hamilton Jr. Ticats Gold squad managed a come-from-behind 32-24 win over Cambridge last Saturday to earn a championship berth against Burlington Red Saturday at 2 p.m.