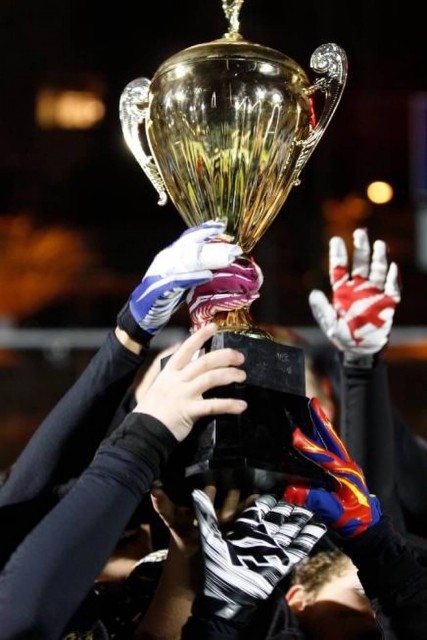 Hamilton’s Jr. Ticats were four for four in championship finals this weekend as the Hamilton Football Association sent three teams to St. Catharines to compete for Ontario Football League titles and one to St. Mike's field in Toronto to fight for an Ontario Varsity Football League championship.

First up on Saturday was the Jr. Ticats Hamilton Gold Peewee A team, entering the game with only one loss for the season against 9 wins – but the defeat had come against its rivals in the title game, the undefeated Burlington Red. The Ticats, under the leadership of head coach James Southward, fell behind 14-6 early in the game but rebounded and ended up on top 33-21 to claim the OFL championship.

Scoring touchdowns for Hamilton were Brayden Kelly, with three, and Anthony Beaudoin, with two. Kelly won an outstanding player award in post-game ceremonies while Beaudoin was named the game’s MVP. Dmitri Saunter batted down a pass from his defensive line position, made numerous tackles and also made key blocks when called over to play on the offensive line.

After the Peewee game, the Hamilton Jr. Ticats Bantam A, coached by Steve Winter, stepped up against Burlington Red and came up with a tight 14-6 win.

On Sunday, the Peewee AA Jr. Ticats under the guidance of head coach Kevin Robinson continued the winning streak with an 8-6 win over Guelph in St. Catharines to take their OFL division. Game MVP was Ryan Martindale, who caught the game-winning TD pass with five minutes remaining. The defence had a game-saving goal-line stand with a minute left, stopping four plays from inside the two-yard line.

Meanwhile, in Toronto Sunday, the AAA Peewees under head coach Frank Miscione took the OVFL fall title in a hard-fought, back-and-forth battle to knock off Burlington 30-16. Highlights included a fourth-quarter punt return for a touchdown and a 100-yard interception return for a touchdown with 38 seconds left to clinch the win. Touchdowns were scored by Jawaun Smith, Cody Hutchison, Jaylen Smith and Joshua Butler.

HFA teams at the AA and A levels compete in the OFL in fall play while its AAA teams play in the Ontario Varsity Football League in the fall.