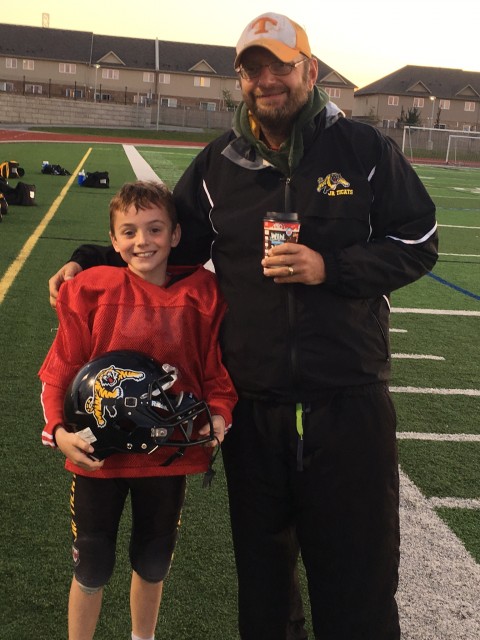 Congratulations to Jr Ticats Atom AA Coach Jeremy Harper and Atom player Ryan Kott!! Both were honored fieldside this past weekend at the Tiger-Cats game vs. the Calgary Stampeders (October 14, 2017).

Coach Jeremy Harper has been with HFA (and prior to HFA with Hamilton Wentworth Minor Football and Hamilton Minor Football Association) for many years.  He has excelled in coaching- beginning as a coaching assistant, position coach and most recently has taken on the position of head coach in with the Atom AA  Jr Ticats.  Coach Harper has also been a part of the coaching staff with our Varsity Ticats.  Coach Harper is described as someone who can motivate players at any given level and has given back to the association and to the game of football in more ways than one- on and off the field.

As Community Captain of the Week, Ryan Kott was chosen as a player who has demonstrated great fundamental football skills and the ability to understand the strategies of football plays in a relatively short period of time.  He is currently the starting quarterback for the Atom team which was an easy fit with his atheticsm.  Most importantly, Ryan is always a true leader on and off the field, and a positive force on his teammates.  He is an outstanding person and is always up to the challenge to better himself.

Congratulations! HFA is proud of you both!